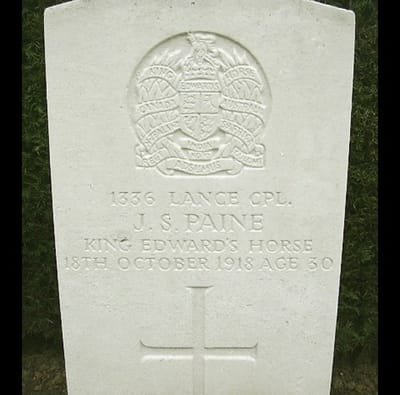 PAIN, Kenneth Wellesley. 225. Private KEH. Article in Sydney Morning Herald in 1916 states that in August 1914 he re-joined the KEH indicating prior-service in pre-war 1914 possibly whilst attending Cambridge or Oxford University. From Australia. Commissioned as a Second Lieutenant Royal Field Artillery (RFA) 8/12/1914. Embarked for France 19/09/1915. Served in Salonika as Adjutant to 117th Brigade RFA from Feb 1916. Severely wounded 27/02/1916. Captain RFA on British War Medal and Victory Medal roll. Mentioned in Despatches. Born 18/01/1889 in Sydney New South Wales the son of the Bishop of Gippsland, Sale, Victoria, Australia and married Mabel Naish 19/08/1915 in Woking, England and died 01/02/1959 in Sydney. Lived in Concord, Sydney in 1924. Son Graeme Kenneth KIA RAAF in 1944. Named in 'Our Forgotten Volunteers: Australians and New Zealanders with Serbs in World War One' by Bojan Pajic.

PEARCH, Walter Bancroft. Captain King Edward's Horse 1910. Commanded the Liverpool Troop as a Lieutenant which was attached to the 'A' (British Asian) Squadron from 16/03/1906. Walter Bancroft Pearch was born on the Wirral in 1877 and was first commissioned into the 1st Lancashire Volunteer Artillery Corps in November 1899. He was then with the Imperial Yeomanry in the Boer War, serving with 29th Squadron, IX I.Y as a Lieutenant. In WW1 he seems to have served only within UK, probably on staff duties, and earned no war medals. After WW1 he lived in London and then in Folkestone. He retained his military rank in all entries in directories and electoral registers until his death in 1952; probate records show that he left an estate valued at £65, 649; his civilian occupation in 1912 was stockbroker. In 1939 he was ‘Lieutenant Colonel retired', evidently unmarried but with a resident chef/valet.

PEDLEY, John Edward. Pre-war KEH. Born in Rangoon, Burma in December 4, 1891, the son of Surgeon Lieutenant-Colonel T. F. Pedley of the Rangoon Port Defence Volunteers. He was educated at Repton Officer Training College and Trinity College, Oxford, England. Upon finishing his education, he was commissioned into the Kings Royal Rifle Corps in December 1914, from the ranks of King Edward's Horse which he had joined in November 1911. He first went to France on July 25, 1915, where he served in the 12th Battalion, attached to the 6th Battalion, and won his Military Cross in 1916. He was subsequently wounded in the right leg on April 25, 1917, documented in his service records as "several small fragments of shell in the right calf and below the knee joint" at Bilhem and was transferred to the Indian Army Reserve of Officers at the end of the year. Five months later, he was declared fit to return to service. He was subsequently employed in the Third Afghan War as a Captain in the 57th (Wilde's) Rifles, I.A. In 1920 Pedley joined the Indian Civil Service and a long and distinguished career ensued, one of his final appointments being as a Member of the Board of Revenue in the United Provinces shortly after the 1939-45 War. Among other appointments in the interim, Pedley was placed in charge of the Gorakhpur district in the late 1930s, an unenvious position that resulted in the award of his C.I.E. in 1939. In 1946, he was awarded his C.S.I. and then retired to the Isle of Man. He died in April 1972 at the age of 80 years. Medals as follows were sold in the US by eMedals Inc: A fine C.S.I., C.I.E., Great War M.C. group of eight awarded to Captain J. E. Pedley, Indian Army, late Kings Royal Rifle Corps, who was latterly a senior member of the Indian Civil Service. The Most Exalted Order of the Star of India, C.S.I., Companion's neck badge, gold and enamel, with central onyx cameo bust of Queen Victoria and rose diamond set legend, a few stones lacking, with full neck ribbon, in case of issue, maker marked GARRARD & Co. LONDON, extremely fine condition; The Most Eminent Order of the Indian Empire, C.I.E., Companion's neck badge, gold and enamels, with full neck ribbon, contact marks on reverse, extremely fine condition; Military Cross, George V; 1914-15 Star (2. LIEUT: J.E. PEDLEY, K.R. RIF: C.); British War and Victory Medals (CAPT. J. E. PEDLEY.); India General Service Medal 1908-35, 1 clasp - AFGHANISTAN N.W.F. 1919 (CAPT. J. E. PEDLEY, 57 RFLS. F.F.); Jubilee Medal 1935, Four medals are officially impressed in capitals. mounted as worn, some contact wear, very fine condition. Also included is copies from the London Gazette documenting his C.S.I. (June 13, 1946, John Edward Pedley, Esq., C.I.E., M.C., Indian Civil Service, lately Adviser to His Excellency the Governor of the United Provinces.), his C.I.E. (June 8, 1939, John Edward Pedley, Esq., M.C., Indian Civil Service, Collector, Gorakhpur, United Provinces.) and his M.C.(January 1, 1917, Temp. Lt. John Edward Pedley, K. R. Rif. C.); original warrants for the C.S.I. (dated June 13, 1946) and C.I.E. (dated June 8, 1939) (edges slightly cut and damaged); a letter from the Central Chancery of the Orders of Knighthood, St. James's Palace, Warrant under King's Sign Manual granting the Dignity of a Companion of the Order of the Star of India (undated); two Investiture Programs, Government House, Lucknow by Governor, United Provinces, dated Wednesday, January 3, 1940 and Thursday, December 19, 1946; eleven pages of copies of his Service Records from The National Archives; a copy listing his qualification for 1914-15 Star for service in the Theatre of War: France, Belgium July 25, 1915, qualifying date July 22, 1915; War Diary of Intelligence Summary document stating "wounded, Capt. J.R. Pedley" at Bilhem (April 25, 1917); his Release from Military Service issued by India Office (November 4, 1919); Indian Army Reserve of Officers Appointment document (February 21, 1919); Covenant of J.E. Pedley, Member of the Civil Service of India, at the Presidency of Fort William in Bengal (August 23, 1920); six pages of copies, Indian Army Reserve of Officers Appointment of Probationers; Indian Civil Service, Civil Service Commissioners recommendation for Selected Candidates for the I.C.S.; three officially issued lists in regards to wearing of orders and medals; three newspaper clippings (tribute from Pandit Pant; announcement of "Companionship of the Most Eminent Order of the Indian Empire"; Selection Board's Decisions for Civil Service Appointments); congratulatory letters for the C.I.E. from the Governor of the United Provinces, June 7, 1939 and the Governor's wife, June 8, 1939.

PERRYMAN, Alfred Humphrey. 1165. Private. 'B' Squadron. Enlisted 10/07/1915 at Bishop Stortford aged 21. Disembarked for Rouen, France from Southampton 3/01/1916. Wounded at Savy 21/03/1917 with gun shot wound to the back. Invalided to England on H. S. Warilda and treated at the Southern General Hospital in Birmingham. Served in Dublin 1917-19. Promoted to Lance Corporal 5/02/1918. Reverted to Private from Lance Corporal for letting a soldier arrested in his charge to escape 14/08/1918. Promoted to Acting Corporal 25/02/1919. Transferred to the Reserve 8/06/1919. Born in Meerut, India and worked as a clerk in Nottingham prior to enlisting. Lived in Clapham Common, London post war. Entitled to British War and Victory Medals.

PINCKNEY John (Jack) William. 505. Lieutenant KEH. 'B' Squadron. KIA 11/04/1918 aged 23 in defence of Vieille Chapelle. Entered France 21/04/1915. Commissioned Second Lieutenant 14/09/1915. Born in 1895 in Orari Bridge, Canterbury, New Zealand. Educated at Moreland's School House, Christ College Grammar School, New Zealand, 1908-13. Son of George and Edith Howard Pinckney, of Waikaia, Southland, New Zealand. Buried in BAILLEUL ROAD EAST CEMETERY, ST. LAURENT-BLANGY, FRANCE and photograph of headstone shown. His father claimed his 1914/15 Star trio. Name commemorated on plaque in St Peters Church, Buntingford, East Hertfordshire, Hertfordshire, UK. Portrait photograph as a Lance Corporal in 1914 courtesy of the Auckland Online Cenotaph. On 16th April 1918 Lieut-Colonel L. James wrote from France to Herbert Pinckney in England, Jack's uncle: "Dear Sir, My gallant little officer Lieut Pinckney, gives you as next of kin. I think that you are his uncle. I have to regret that he is reported missing. I hope, and shall continue to hope for a long time, that he is a prisoner. The circumstances are these, and it is difficult for one to speak temperately about them. My B Squadron was ordered to hold a particular bridgehead and it received a sustained and fierce attack by the enemy. So important was this bridgehead that I had to order the squadron to die to the last man rather than give ground to the enemy. How gallantly this little band performed their duty may be seen from the fact that they held their part for thirty-six hours and the enemy had eventually to bring up trench mortars to dislodge them. Apart from the grief which comes to a commanding officer in these distressing circumstances I had a real attachment for young Pinckney, who had been a recruit officer under me in Ireland. I can ill spare such a gallant boy, but though it is a small consolation to his relatives his sacrifice was not in vain, for his gallantry and that of those with him saved the local situation at a most grave and critical moment. I shall still continue to hope that we shall hear of him as a prisoner and living, but as the whole line was pressed back the enemy are in possession of the pass we helped to hold gallantly. I remain, Yours faithfully, L. James, Lt-Colonel, King Edward's Horse". The Christ's College register of August 1919 carried this letter and record of Jack Pinckney: A LETTER FROM THE FRONT. The following is a copy of a letter sent to Mrs Empson, December 18, 1918: "Madame, Mr Pinckney having been my troop officer for over twelve months in France and Italy, and having been chosen by him for especial work on several occasions, I feel it is my bounden duty, seeing that I was one of the last men to see him, to write and let you know the little I do know. Of all the brave men that held the bridge at Vieille Chapelle, Mr Pinckney was the bravest. I am not alone in saying this; write yourself to any of the boys that are now returning from Prison Camp, and you will find them all as proud of Mr Pinckney as I am. Mr Pinckney's coolness and courage held us together, and kept our spirits up. He walked about from one outpost to the other, rifle in hand "potting Jerries", and giving us encouraging words, and after two days' hard fighting he said he would never be taken prisoner, and when all our ammunition was spent Mr Pinckney still had a few rounds left, and there he stood, even after we were all captured, "potting Jerries". I intend, on rejoining my regiment, to speak to Corporal Murray, DCM, and others, and see if we can't get Mr Pinckney's bravery acknowledged. But your name was given to me as being a relation, and I thought you would like to know. Yours sincerely, Dyekon E. Brazier, L/c, 1st K.E.H." on 18 Dec 1918.

PORTER, John (Jack) Charlton. 846. Private KEH. Enlisted in the KEH having sailed to London from Shanghai where he was employed with the British Cigarette Company on board the SS Suwa Mara on 16/10/1914. Entered France 22/04/1915. Commissioned as a Second Lieutenant, Machine Gun Corps 30/01/1917, F Battalion. KIA 24/07/1917 with 6th Battalion, Tank Corps when a shell hit his dugout. Buried in DOZINGHEM MILITARY CEMETERY, Belgium. Born 1888 and had 3 years prior service with Shanghai Volunteers. Medals claimed by eldest brother Thomas Henry Porter from Shanghai.

PORTUS, Garnet Vere (Jerry). Private King's Colonials. Served 1909 from comments made about serving under the same Serjeant-Major as Watson Douglas Shennen in his obituary in 1937. Born 7/06/1883 in Morpeth, New South Wales and died 15/06/1954 in Adelaide, South Australia. An academic historian, author and theologian who studied at Sydney University and Oxford University 1909-1911 where no doubt he enlisted in the King's Colonials. A Rhodes scholar and played rugby for England.

PURSER, James Hartnell. Private. Born in England and emigrated to Australia after 6 years service in the KEH. Served in the AIF 1916-19. Biography in www.kingedwardshorse.net