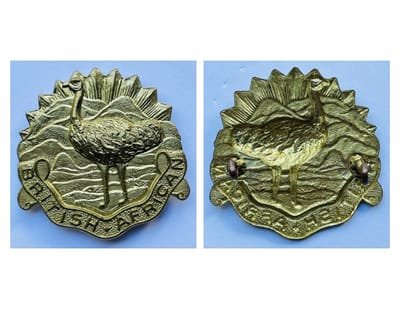 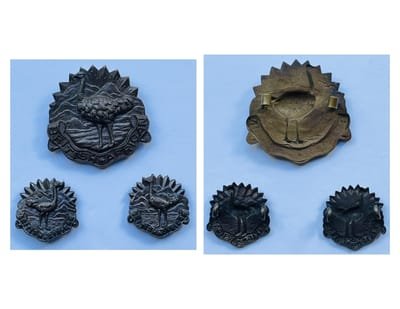 The ‘D’ Squadron Other Ranks' headdress badge shown in Figure 247 is a copy.  The strike of the badge is poor with the badge surface being relatively flat and missing the pronounced raised ground the ostrich is standing on found on genuine examples. One of the loops has prominent feet.

Copies of the 'D' Squadron headdress badge typically are a poor strike with a lack of the fine lines around the eye and neck. The majority of copies have footed loops. There are notable differences in size and weight between original badges and copies.

As described for the second pattern Regimental headdress badge examples are known in bronze for wear with Officer's Service Dress (OSD). Figure 248 shows a bronze genuine ‘D’ Squadron (British African) Officer's headdress badge (KK 1372) with matching pair of collar badges all in bronze again for wear with Officer's Service Dress. I have not been able to find photographic evidence of bronze Squadron headdress or collar badges being worn by the King's Colonials.