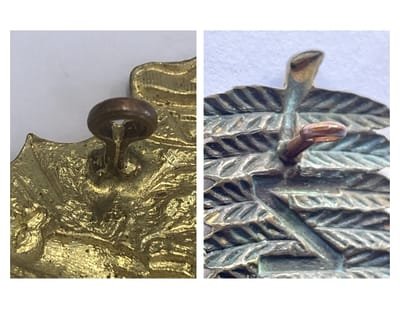 One of the key considerations with determining whether a King’s Colonial headdress badge is genuine or not is in relation to what type of loops it has. The loops used to fasten the King’s Colonials badges to the uniform on genuine badges were made of copper wire and were brazed onto the back of the badge by hand. These loops have a shank with an end which has the same or only marginally greater, cross-sectional area as the shank itself.

Figure 169 shows a selection of different loops used in the manufacture of badges by J. R. Gaunt & Sons in London from a salesman’s catalogue circa 1904 (Rob Miller: British and Commonwealth Badge Forum). Several of these loops have small feet and several have no feet at all. Copies of King’s Colonials headdress badges that have been made from the genuine dies have been finished off by brazing on loops with a different shape than the genuine loops. The loops on copy badges (Figure 170) have a broader base with a larger contact area on the rear of the badge as compared with genuine loops (Figure 171). The loops on copies are often referred to as being footed.

The issue of knowing what is a genuine badge to use as a reference again comes into play. I have been fortunate to acquire a number of original King's Colonials Officers gilt and Other Ranks gilding metal badges which came from a collection started in the 1940s before their was large scale copying of badges from the original dies. The badges in this collection are actually the Regimental and Squadron headdress badges of the King's Colonials and the Regimental badges of the King Edward's Horse and 2nd King Edward's Horse which were loaned to Arthur L. Kipling and Hugh L. King for photographing when they were preparing their 'definitive' reference book ‘Headdress Badges of the British Army. Volume I; up to the end of the Great War’ (Frederick Muller Ltd., London, 1978). These badges serve as a reference set. Additionally, the King’s Colonials collar badges have not been copied to date and the loops on these badges were produced in the same period as would genuine headdress badges. Close examination of forty or so King’s Colonials collar badges reveals that none have broad-footed loops. The conclusion which can be drawn from this is that genuine King’s Colonial headdress badges should lack broad-footed loops.

The brazing solder on genuine badges was of the same basic composition of the badge with a golden braze on Officer's badges and a yellow-brass on Other Ranks badges which is often darkened with age more so than the golden braze of Officer's badges. This is because the solder was made from the trimmings, filing or sawdust produced during the manufacture of badges from sheet brass. The solder was sparingly applied to genuine badges but sufficient to hide any trace of the base of the loop and often extends into the gap between the two arms of the loop. On copy badges the solder rarely covers the footed loop especially those with more pronounced broad feet. The types of loops and solder used on genuine headdress badges is difficult to fully validate given the inherent difficulty in authenticating a genuine headdress badge as a reference. However, the type of loop and solder used on collar badges which have not been copied serve as a surrogate for the headdress badges. Hence, the photographs and images of King’s Colonials headdress and collar badges which follow generally include an angled view of the rear of the badge to more clearly show the loops and brazing solder.

Figure 169: Selection of different loops used in the manufacture of badges by J. R. Gaunt & Sons in London from a salesman’s catalogue circa 1904-08 (Courtesy of Rob Miller: British and Commonwealth Badge Forum).

Figure 170: Close-up of a non-footed loop with golden braze between the arms of the loop and at its base on a genuine badge and a footed loop on a copy badge.

Contemporary photographs serve as a guide as to what was worn and when provided of course the photographs themselves are or can be dated. However, the quality of the strike and details of the loop positions on badges cannot be determined from photographs of them being worn unless it is an exceptionally high resolution portrait photograph.