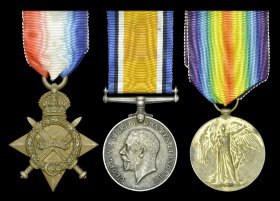 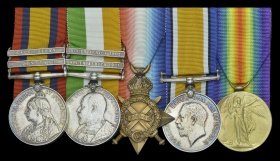 FISHER, Alwyn George Edmond. 1006. Private.  Enlisted at Shepherd's Bush. Entered France 4/05/1915. Born in East Finchley, London and KIA 25/05/1915 aged 31 at the Battle of Festubert. Second surviving son of George Fisher, of Hurst, Sutton, Surrey, formerly partner in the firm of Messrs. Robinson and Fisher, of Willis' Rooms, St. James', and of Katie, daughter of Samuel Heath. Manager of an estancia near Bahia, San Bias, Argentina. Educated at Harrow. Trooper Fisher, being in England on a holiday at the time, joined the Legion of Frontiersmen on the first day of the War, afterwards exchanging to the 2nd King Edward's Horse. He went to France in April, 1915, and saw much fighting near Cuinchy and in the Battle of Festubert. He was killed on 25/05/1915, advancing with hand-grenades, for the second time, on the German trenches. A friend, who was with him at the time, writes : " I was running with him down the side of a trench, under heavy fire, when a chance shot must have skimmed a low part of the trench. He was struck in the head, and death was immediate; he could never have known anything." Commemorated on Le Touret Memorial, France. (Possible photograph Figure 23)

FORREST, Harold Archibald. 940. Private H. A. Forrest, King Edward’s Horse, later Lancashire Fusiliers. 1914-15 Star (940 Pte. H. A. Forrest. K. Edw. H.); British War and Victory Medals (940 Pte. H. A. Forrest. K. Edw. H.). Harold Archibald Forrest was born in Streatham in 1889 and attested for General Service on 4 September 1914, giving his profession as Assistant Riding Master. He served during the Great War with 2nd King Edward's Horse on the Western Front from 5 May 1915, and, having subsequently transferred to the 2nd Battalion, Lancashire Fusiliers, was discharged on account of wounds on 9 August 1918 (entitled to Silver War Badge). He died in Rochford, Essex in 1948. Photograph of 1914/15 Star medal trio sold by Dix Noonan Webb UK at auction July 2017 shown.

GARLAND, Charles (Dick). 932. Private, Lieutenant Yorkshire Dragoons. Dick was born in Canada and educated at Brighton Grammer School in Victoria, Australia as his father Richard was General Manager of Dunlop Pty Ltd in Melbourne, Australia.  Dick and his brother Ewart were living in London at the outbreak of the war and Dick enlisted in 2KEH in April 1915.  He saw service with the KEH during the Easter uprising in Ireland and wrote a letter that was published in 'The Age' newspaper in Victoria on 1st July 1916 which caused a stir as to the scale of civilian losses during the uprising and the plight of the Irish people. Ewart trained to be a pilot with the Royal Flying Corps in July 1916. A photograph of Dick Garland in India in 1943 is available on-line courtesy of the State Library of Queensland http://blogs.slq.qld.gov.au/ww1/2016/03/28/charles-garland-easter-rising-1916/.

GEORGE, Edward Royston. 957. Private. Commissioned as a Second Lieutenant in the Royal Engineers 15/2/1916 and later promoted to Captain.

GROSVENOR, Gilbert. Major the Honourable Gilbert Grosvenor, Rifle Brigade, King's Colonials, 2KEH and Nottinghamshire Yeomanry. Awarded Queen’s South Africa 1899-1902 with two clasps Transvaal, Cape Colony (Lieut: Hon. G. Grosvenor, Rifle Bde:); King’s South Africa 1901-02, 2 clasps (Lt. Hon. G. Grosvenor. Rifle Bde.); 1914-15 Star (Lieut. Hon. G. Grosvenor. K. Edw. H.); British War and Victory Medals (Major Hon. G. Grosvenor.) The Honourable Gilbert Grosvenor was born on 22 August 1881, the second son of the 1st Baron Stalbridge and his wife Eleanor, and the grandson of the 2nd Marquess of Westminster. He was educated at Eton, and was commissioned Second Lieutenant in the Rifle Brigade, serving with them in South Africa during the Boer War. He transferred to 'C' Squadron, King's Colonials in 1908. He then served with the 2KEH as a Second Lieutenant from Oct 1914 before transferring in 1916 to the Nottingham Yeomanry (Sherwood Rangers) with the rank of Major. Grosvenor married Miss Effie Cree, the daughter of the Reverend Edward Cree, on 4 July 1913. He died without issue on 15 June 1939. Photograph of his medals sold by Dix Noonan Webb, UK at auction in December 2016 shown. Lieutenant in 'C' Squadron KEH photographed at Woodbridge in 1914.