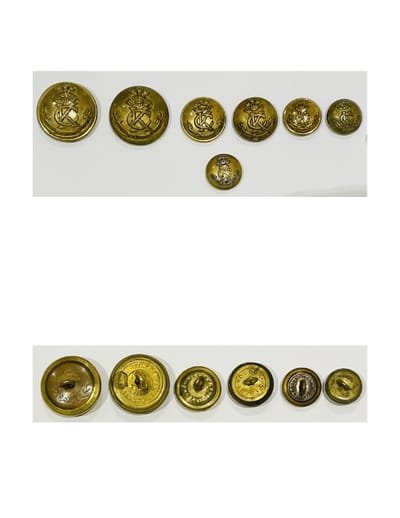 The King’s Colonials Full Dress and Service Dress tunic breast and cuff buttons were in gilt for Officers and brass for Other Ranks. They are referenced as Ripley Ref No 419 for the cuff button and as Ripley and Darmanin Ref No 140 for the tunic button under KEH. They are of the same design as the second pattern Regimental badge with the Prince of Wales’s plumes over ‘KC’ letters and Regimental motto “REGI ADSUMUS COLONI”. A selection of different size King’s Colonials buttons are shown in Figure 295.

Ripley and Darmanin note that there are also white metal King’s Colonials tunic buttons. These would be consistent with the white metal King’s Colonials shoulder titles noted in Figure 286 thought to have been manufactured and worn for ceremonial occasion/s. To date I have not seen a white metal King's Colonial button. A further note from the authors describes a domed button with silver Regimental device on gilt which may have been for an Officer’s cap or Mess Dress. This actual button is shown at the bottom of Figure 295 and it is a three-piece button with the white metal Prince of Wales’s plumes over ‘KC’ letters and Regimental motto “REGI ADSUMUS COLONI” pinned to the front of the sealed back button. The button measures 16mm.