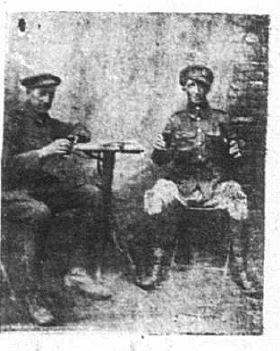 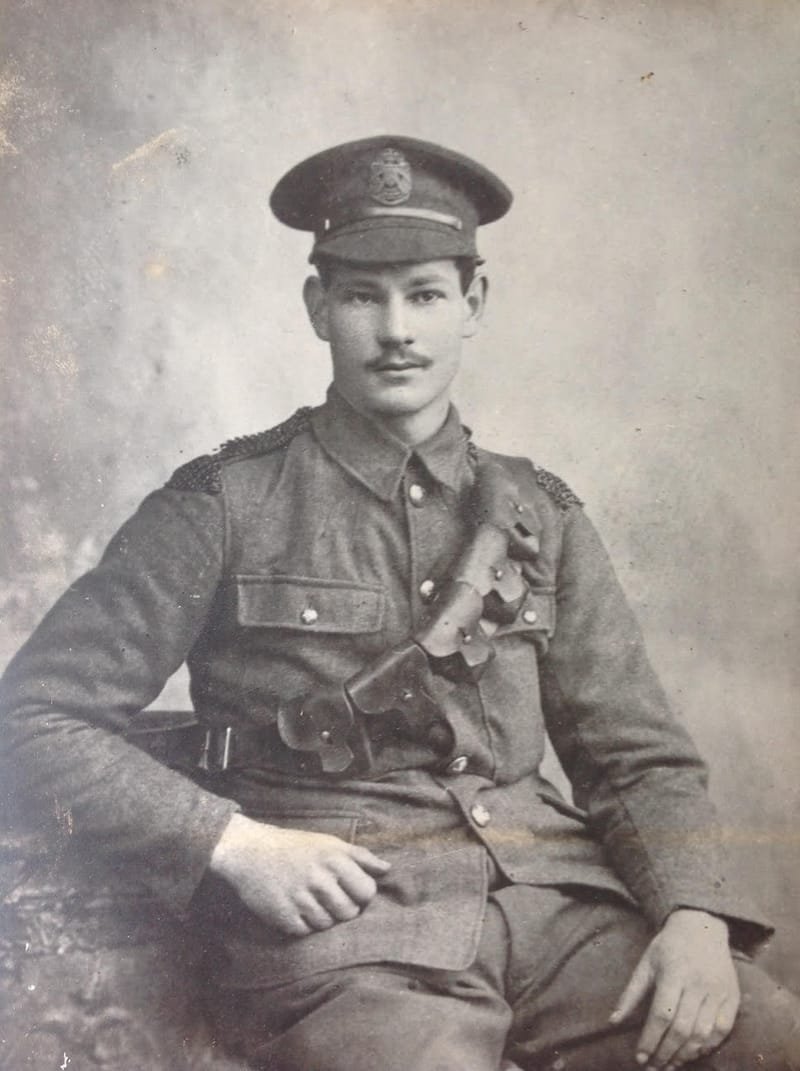 JARVIE, Norman Alexander. 405. Private KIA 13/12/1914 aged 40. Born in 1874 in Anderson, Glasgow. Received a commission as a Second Lieutenant in the 3rd /4th Battalion of the Highland Light Infantry, dated to the 27th May 1895, 28th July 1896 promotion to full Lieutenant. On 10th October 1899, The London Gazette announced Jarvie’s promotion to Captain. The very next day, the Second Anglo-Boer War broke out and on January 25th 1900, the Dundee Evening Telegraph reported that Jarvie had been attached to the 1st Battalion and was soon to depart for South Africa. The 1st Battalion had suffered heavy casualties at the Battle of Magersfontein (11th December 1899) and Issue no 13, vol 2 of the HLIC stated that he was leading a detachment of 50 NCOs and men to replace these losses. On 5th February Jarvie had departed Devonport with his 50 men and was to sail that afternoon from Southampton on the ship Majestic. In late March, reinforcements from the 4th Battalion (likely including Jarvie) finally caught up with the 1st Battalion in the Orange Free State capital of Bloemfontein. The very next day, the battalion had to make a forced march to join the Highland Brigade at Reitfontein. Assuming that Jarvie was not one of them, he almost certainly accompanied the 1st Battalion on its march to Heilbron, during which they lost 70 men to constant harassment from Boer guerrillas. The HLI’s roll for the Queen’s South Africa Medal lists that Jarvie qualified for the Wittebergen clasp, which required him to be in the area of Harrismith and Bethlehem in July of 1900. This means he probably took part in the HLI’s capture of Retief’s Nek on 23rd July. He may also have been present for the action at Spitz Kop on 15th August. Jarvie boarded the ship Britannic from Capetown on 6th October and was on his way back to Britain. On 16th November 1900, the London Gazette published a notice that Jarvie had been removed from the army, ‘the Queen having no further occasion for his services’. This dismissal immediately caused a minor scandal, with half a dozen newspapers printing the story. On 24th November, the Worcester Chronicle published the story under the headline ‘Officers Cashiered’. The manner of his dismissal and the reporting around it suggests that Jarvie’s military career may have ended in a court martial. When the next war broke out 14 years later, he was 41 and technically too old to enlist. However, he appears to have enlisted as a simple trooper in the 2KEH. Jarvie may have lied about his age to join up, but as he was physically capable and passed the tests, many examiners would happily have passed him. Furthermore, he may have omitted to state his previous service, since many battalions didn’t want court martialled soldiers in the ranks. However, the 2nd King Edward’s horse was made up primarily of ex-patriot Britons from the colonies and Jarvie’s family connections with Singapore and the Far East may have been a factor in his acceptance. He died of illness 13/12/1914 aged 40 in Brentford Hospital, Middlesex, United Kingdom and is buried in Middlesex. Name commemorated on the Glasgow Necropolis. Jarvie’s Officer’s sword was first recorded in Dix Noonan Web’s Auction of the 14th December 2006. It later appeared in Bonhams’ auction on the 5th December 2012. The sword carries the following Inscription:“Norman A Jarvie, Captain, 4th Ban., Highland Light Infantry, South Africa, 1899 -1900”.

JOHNSTON, Guy Featherston.  2KEH Farrier Serjeant may have served KEH prior. Served in the Boer War as a Lieutenant 1363 with 8th Company, 4th New Zealand Contingent Left Wing 19/06/1901 after four years in 'D' Battery, New Zealand Artillery. Sailed on the 'Gymeric' 31/03/1900. Captain in the New Zealand Militia in 1902. After serving in France with 2KEH returned to New Zealand as a Lieutenant 12701 in the 13th Reinforcements, New Zealand Field Artillery, New Zealand Expeditionary Force from 15/12/1915 with an embarkation Date 27 May 1916 on HMNZT 54 'Willochra'. From Wellington, New Zealand in Boer War and Auckland in WW1. Born 2/9/1872 the son of Hon. C. J. Johnston, MP, Karori, Wellington, New Zealand and died 2/01/1941.Brother of Brigadier-General Francis Earl Johnston, CB KIA 7/08/1917. Born in Wellington, he was educated in England. Joining the British Army, he served with the Prince of Wales’s North Staffordshire Regiment in the Sudan and later in the Second Boer War in South Africa. In New Zealand on secondment to the New Zealand Military Forces when the First World War began, he was posted to the NZEF as commander of the New Zealand Infantry Brigade. He led the brigade through most of the Gallipoli Campaign. Later, on the Western Front, he commanded the 1st Infantry Brigade and, for a brief period, the New Zealand Rifle Brigade. He died as a result of sniper fire on 7 August 1917, one of three New Zealand brigadier generals killed during the war. Lieutenant Johnston noted as serving in the 2KEH in the Taranaki Herald 1/10/1914. Commemorated on the Auckland Online Cenotaph.

JONES, Frank (Fred) Wright. 927. Private 2KEH enlisted  December 1914 and served in Serjeant Cowley's troop. Transferred to the Army Service Corps on 28/09/1917 as Lance Corporal R/39963. The very grainy photograph of Private Frank Jones with Private Charlie Hakewill, 2KEH  appeared in the Market Harborough Advertiser 9 November 1915 taking a break. The article about the photograph explains Charlie was nicknamed “Peter the Painter” and Fred W. Jones was “Jockey” enjoying a “well earned rest,” and we might also add, a well earned refreshment. Both send cheery greetings to their Harborough friends. They are in 2nd King Edward’s Horse, The Canadian Mounted Brigade. An additional photograph of Private Jones, 2KEH who was a cross country horseman from a village in Market Harborough, UK on horseback is shown in Figure 39d from local sources by W. R. (Bob) H. Hakewill a published local historian in Market Harborough, UK.

KNOWLES, Benjamin. 389. Serjeant 2KEH. Lieutenant, Captain, Major Royal Army Medical Corps. Commissioned 9/11/1916. Awarded Military Medal as a Serjeant in 2KEH and Military Cross as a Captain RAMC (London Gazette 24/08/1918, was himself wounded while attended to the wounded) and Mentioned in Despatches.