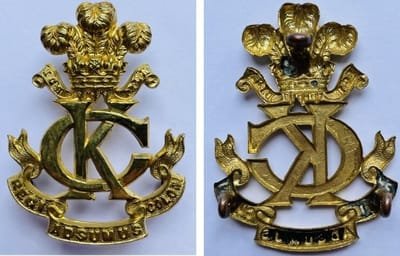 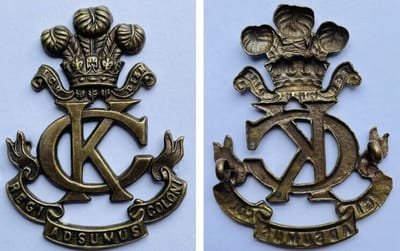 A genuine second pattern Other Ranks headdress badge (KK 1371) in gilding metal is shown in Figure 190. This badge is die struck and has three loops that lack feet. The strike is very crisp and the lettering is very distinct at the edges.

Figure 191 is a copy of the second pattern Other Ranks headdress badge (KK 1371) in die struck, gilding metal with two loops.

This copy has only two lower loops which are positioned east-west and lacks the third loop normally positioned behind the Prince of Wales' feathers. The badge is a poor strike relative to a genuine badge lacking the detail especially with the lettering of the motto. Another characteristic of poorer copies of this badge are the quality of the void at the base of the Prince of Wales feathers with voided/cut away area between the feather quills being irregular in shape and instead of being between the quills on the genuine example it cuts into the quills on poor copies. Copies of the second pattern Regimental headdress badge (KK 1371) in gilding metal are also known with a slider fitted to the rear behind the Prince of Wales' feathers. Based on my experience, sliders were not fitted to any genuine King's Colonials headdress badges.

The quality of the strike, differences in weight and size, the number, positioning and broad footed loops (or sliders) are collectively characteristics of copies of second pattern Regimental headdress badges.