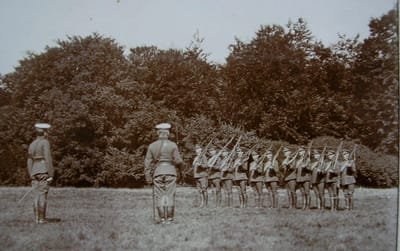 In 1903, the annual camp was held at Latimer Camp in Chesham, Buckinghamshire in August of that year under the encouraging and watchful eye of the land holder, Lord Chesham. Unlike some irregularities with the previous camp the Latimer Park experience was very soldierly. The camp was attended by eighteen Officers and 202 Other Ranks illustrating its humble beginnings. The band didn't attend the opening of the camp due to a dispute over pay and under Band Master Ambrose Hulley all sixteen members were absentees. This became a police matter and all eventually joined the camp.

The annual camps were great training opportunities for marching, parading and horsemanship.

On Sunday 9th August 1903 the Regiment attended an open-air church service at Latimer. Colonel Willoughby Wallace gave the readings and present at the service were the men of the 'D' (Chesham) Squadron, The Buckinghamshire Imperial Yeomanry (Royal Buckinghamshire Hussars). In the afternoon games were played and the Chesham prize band played music.