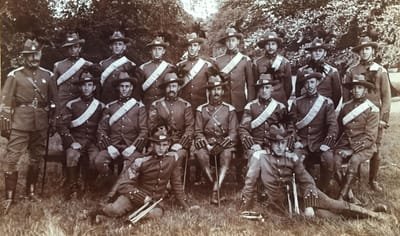 The King’s Colonials (KC) were a unique yeomanry Regiment in the British Army in the opening years of the 20th century. Although formed in the final stages of the Boer War, the Regiment itself did not see service there although a number of its individual members did. The King's Colonials were comprised of Colonial volunteers resident in Britain initially from those living in London but in time extending to Cambridge, Oxford and Liverpool. A combination of colourful characters, rich and flamboyant uniforms, iconic badges proudly reflecting Dominion heritages and Royal patronage ensured that the King’s Colonials became a much talked about Regiment. The King’s Colonials bore a number of distinctions and among them that they were the only Colonial unit administered from Whitehall.

Much of the time in the Great War, the King Edward’s Horse were kept in reserve waiting for breakthroughs in the line which rarely if ever occurred. They spent much of their time foraging for themselves and their horses and delivering messages. The infantry took their abbreviated title of ‘KEH KODR’ and jeeringly called them the ‘King’s Own Despatch Riders’.

The truth is that the King Edward’s Horse had an exemplary wartime service record. During the war the Regiment lost ten Officers, two Staff Serjeants (Sergeants) and 69 Other Ranks (Private is used but Trooper is often used in different sources) killed in action (KIA), died of wounds (DOW) or died on service. They were awarded four Distinguished Service Orders, one with bar; eleven Military Crosses, one with bar; ten Distinguished Conduct Medals, one with bar; five Meritorious Service Medals and twenty-five Military Medals plus a number of Foreign service awards and Mentioned in Despatches.

The 2nd King Edward’s Horse (2KEH) have nothing more than a namesake as a link to the King Edward's Horse (1st). They too have a proud history of service including having fought as dismounted troops in France. I am currently collating information regarding their gallantry medal entitlements as part of compiling their Nominal Roll. This includes a Private of the 2KEH, John Sherwood-Kelly, a South African with considerable Colonial military service passed through their ranks albeit briefly before being commissioned into the Norfolk Regiment. He went on to command the 1st Battalion, The Royal Inniskilling Fusiliers and was awarded the Victoria Cross for his actions on 20 November 1917, during the Battle of Cambrai.

The King’s Colonials/King Edward’s Horse and 2nd King Edward's Horse represent a tremendous topic for research. The badges of these Regiments in particular make a fascinating study. This was my initial interest in the Regiments which grew over time to a fuller appreciation of their uniforms, service history and place in history.

There are many myths, mistruths and misunderstandings regarding the history, uniforms and badges of the King’s Colonials, King Edward’s Horse and 2nd King Edward’s Horse. Their headdress badges have been heavily copied and I have set out to try and advise the reader as to how best to distinguish an original headdress badge from a copy. In attempting to do so I have purposely chosen not to disclose certain characteristics and images of badges which I believe would help copiers of badges "improve their game".

As this website is intended for research purposes only I have included several images from websites where I have been unable to make contact with the owner and apologise in advance should the owner not wish the image to be used. I would hope to hear from them and seek their permission to support this project. All images without a specific attribution are from my own collection. The hyperlinks are embedded in the text in blue to allow the original source and additional information to be accessed.

I would like to thank and pay tribute to the following descendants and biographers of those who served in the King’s Colonials, King Edward’s Horse and 2nd King Edward’s Horse. They have all identified individuals in photographs and have generously assisted in providing biographical details, stories and additional photographs. My very good friend, Owen Dobson has generously provided biographical details for a number of those who served in these Regiments. Owen's biographical narrative of Private Osborne Lean, 1704, 2nd King Edward's Horse I have included in full in the Nominal Roll section of this website. It is the most detailed account of service life in these Regiments that I have come across. Many thanks Owen. Ray Mitchell and I met through this website and our grandfathers service on the Somme crossed over. Thanks to his research Ray was able to work with the Office of the Australian War Graves to have his grandfather Trooper Jack Fraser Mitchell's headstone replaced with an official war grave surmounted with the emblem of the 2KEH badge.

Private Robert C. Harris. 619, King Edward's Horse. His WW1 medal trio, Hotchkiss Machine Gun arm badge and shoulder titles were a kind gift of Malcolm Johnston (ex-3rd Battalion, The Royal Regiment of Fusiliers) and were originally with his Father's (ex-Royal Signals, who was captured at the fall of Singapore and interned in Japan) possessions. I would be happy to hear from a descendent of Private Harris to pass the medals on to them.

Peter Nemaric deserves special thanks for sharing several excellent photographs of the King’s Colonials and King Edwards Horse. Peter created and manages the King Edward’s Horse website and I am deeply indebted to him for allowing them to be used and hope that the information on my website compliment the years of meticulous research he has invested in the King Edward's Horse.

My thanks go to the exhaustive research made available to me by Richard Breislin of www.blackthorn-antiques.com on the swords of the King's Colonials and King Edward's Horse. This invaluable information is detailed against his photograph of a British 1899 Pattern Cavalry Trooper’s Sword, King Edward's Horse in Figure 132 and under the Kings Colonials (KC) Officer's Full Dress Uniform 1901-04 section of this website.

I would also like to especially thank Carole McEntee-Taylor for her permission to use the photographs of Sydney Harris from her excellent biography of this remarkable man (From Colonial Warrior to Western Front Flyer: The Five Wars of Sydney Herbert Bywater Harris. London: Pen and Sword, 2015). Similarly I would like to sincerely thank Jamie Vans, great nephew of Captain Frank Vans Agnew, MC for his permission to use photographs and the vivid biography published as "Veteran Volunteer: Memoirs of the Trenches, Tanks & Captivity 1914-1918". London: Pen and Sword, 2014.

Since this website went live an article by Keith Hook and David Knight entitled ‘The Badges, Titles and Buttons of King Edward’s Horse’ was published in the Journal of the Military Historical Society. 251:70-78, 2018. This excellent article contains a number of additional pieces of information regarding the badges and uniforms of the King's Colonials and King Edward's Horse which I now reference on my site. I am appreciative of their efforts to document their research and subsequent correspondence with Keith and David has yielded a significant amount of fresh information and photographs regarding their badges, uniforms and history.  Many of the King's Colonials and King Edward's Horse badges featured on this website came from Keith's original collection. Photographs of these badges were used by Arthur L. Kipling and Hugh L. King in their treatise 'Head-dress Badges of the British Army 1800-1918: v.1'.  My eternal thanks to Keith.

My heartfelt thanks go to my brother Stephen for his extensive and patient proof-reading, and encouragement. The badge photography was a considerable challenge. I would like to especially thank my father-in-law Michael for all his experimentation and technical tuition to assist.

I was encouraged to write this article by my close friend and badge muse John Longstaff who has sought to teach me much about the badges of the British Empire. The learning continue and I sincerely thank John for his edits, guidance and friendship.

My good friend Pat Birley has been a tower of strength and guidance to me in helping curate my collection and sourcing items for me in the United Kingdom. If I was to learn half of what Pat knows about shoulder titles then I would be a very satisfied.

There is no doubt in my mind that this project would have been accomplished without the guidance and practical support of Ivan Machin. Having read Ivan’s tremendous book on the ‘Badges of the York and Lancaster Regiment’ I eagerly contacted him to seek his guidance on how to go about tackling the compilation of my notes and assemblage of photographs into something concrete that I could share with others.  Ivan has been generous with his time in supporting me on this journey and has openly shared with me his own experience of converting to a badges of York and Lancaster website so that fresh additions to a collection can be accommodated. I was very fortunate to be introduced to Michael Wood, who has published a splendid and authoritative guide to the 'Badges and Insignia of the Essex Yeomanry' and am very appreciative of his friendship, support and practical encouragement. Michael has also created a wonderful website to the badges of the County of Essex. I encourage readers to click on the links to these websites which provide terrific reference sources.

I am indebted to the love and support of Anna, my wife and four wonderful children Cameron, Elisabeth, Alexander and Charlotte for their infinite patience and tolerance for their Father’s fascination with badges and their history.