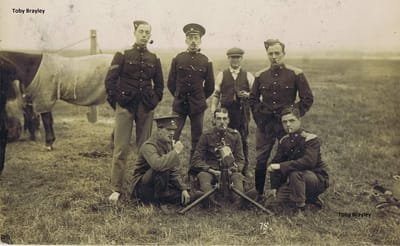 The annual camp for 1913 was held in July-August at Bulford on Salisbury Plain in Wiltshire.

Figure 73: King Edward’s Horse with the Regimental band on church parade in Bulford in July-August 1913.

Figure 75: Trooper of King Edward's Horse on the left of a Maxim Machine Gun (the chin strap of his cap has been curiously been looped over his KEH cap badge) alongside members of the Middlesex Yeomanry. The figure seated behind the Maxim looks to also to be Trooper with KEH from his collar badges which are likely to be King's Colonials Squadron collar badges and his single shoulder title looks to be the two line KEH over KODR. The postcard is dated August 1913 and would have been from the annual camp (courtesy of Toby Brayley).