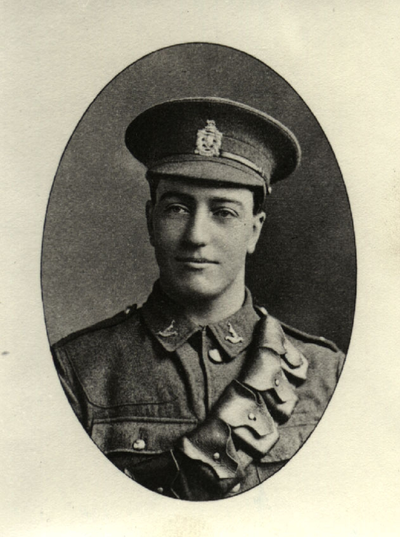 There is evidence from the diaries of King Edward’s Horse members that at least some of the Regiment continued to wear their old King’s Colonials Squadron headdress and collar badges through into the Great War.  Lieutenant Allan Wettenhall Lade writes in a letter to his mother on the 13th December 1914, ‘I have just bought one of my own a very smart affair riding breeches and now have collar badges of Australian birth…the Kangaroo.  Every man in our troop has the distinctive badge of his Colony – India an Elephant, Africa an Ostrich, Canada a beaver and so on.’ Corporal Brian (Frederick) Wade, King Edward’s Horse writes: ‘For some time I have been trying to obtain a cap-badge to complete the set, and tonight I am posting to you a set of three; cap, collar and shoulder badges (Brian Wade. Peace, War & Afterwards (1914-1919). Halifax: Sentinel Projects, 1996). The largest is worn on the front of the cap, the smallest on the collar-lapel, and the numerals on the shoulder- badge mean “King Edward’s Horse = “Kings Overseas Dominions Regiment”. The collar badges are, I think, the most interesting, the ostrich with a background of ‘koppies’ and mountains backed by the sun which is so typically South Africa.’

Collar badges were generally not worn by Other Ranks of the King Edward’s Horse from 1915 onwards (Figure 341).

Figure 341: Sergeant G. H. Tiplady (seated centre of the second row) and his Troop of ‘A’ Squadron of King Edward’s Horse at Canterbury in August 1914 without collar badges (The King Edward’s Horse Senior and Junior Comrades Association Annual Bulletin. Number 20: 13, 1953).