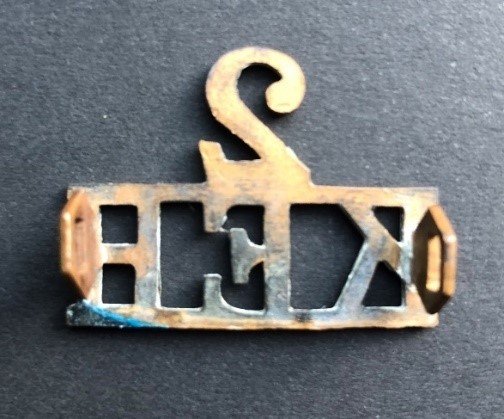 The 2nd King Edward’s Horse Officers and Other Ranks shoulder titles were also made with hexagonal loops as shown in Figure 367.

A slip-on shoulder strap title with 2 over KEH embroidered in white on a trapezoid shaped olive-green cloth patch (Imperial War Museum Catalogue Number INS 31138) was approved by the Army Clothing Department on 22/6/1917 as Pattern No. 9552/1917 with the Sealed Pattern card held by the Imperial War Museum. This Pattern was over-stamped obsolete on the 7/10/1919 and there is no photographic evidence supporting it ever having been issued and worn.  The existence of a Sealed Pattern card for a cloth shoulder title for the Essex Yeomanry is also noted as never having been issued and worn (Michael Wood, personal communication).

There is also a variant King Edward’s Horse Officer’s shoulder title which is straight pattern 2nd KEH in a gilt finish (Figure 369).

Figure 369: A variant 2nd KEH shoulder title that is a single line of 2nd KEH rather than 2 over KEH in gilding metal with rounded loops circa 1915-17 (Patrick Birley collection).