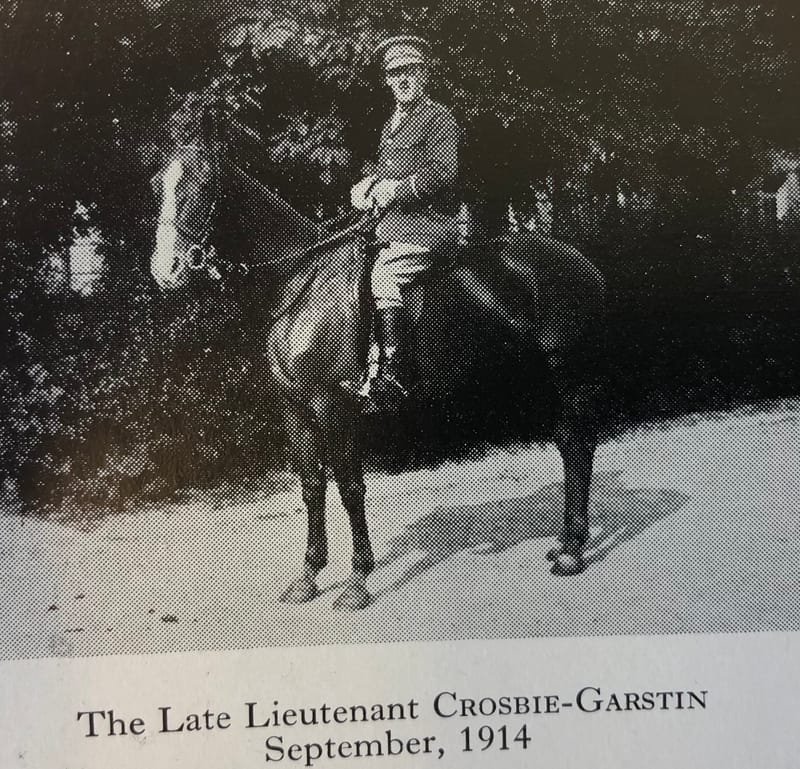 GARSTIN, Crosbie 612. Crosbie was born in Mount Vernon, Newlyn, Cornwall to Norman Garstin and Louisa ‘Dochie’ née Jones. He was the eldest of three children; Denys (later Denis) (1890 – 1918) and Alethea (1894 – 1978). He was educated at Brandon House, Cheltenham, Elstow School, Bedford and in Germany. He was head-boy of his school due to sporting prowess in rugby union and swimming. As a young man he traveled and worked as a bronco buster in Montana, United States and as a lumberjack in Canada. He also traveled to China, Hawaii, Japan and Morocco. On returning home his father, fed-up with Crosbie's inability to get suitable qualifications and hold down a job, sent him to South Africa. From 1912, he ran a cattle ranch in Bechuanaland, and acted as a bush ranger to the Tati Concessions. With the outbreak of World War I he came back to Britain and in October 1914 joined 'B' Squadron of the KEH as a private. The regiment left for France on 21 April 1915 and Garstin was promoted to lance corporal shortly before leaving. He was commissioned on the battlefield as a Second Lieutenant on 14 September 1915, and joined 'C Squadron, which was attached to the 47th (London) Division at Nœux-les-Mines and was involved in the Battle of Loos and on the Italian Front. In 1916, he was posted to Dublin as an Intelligence Officer during the rebellion there. As well as writing poetry he made contributions to Punch magazine which were well received. Garstin disappeared when returning from a party to a friend's yacht Osprey in the Salcombe estuary on 19 April 1930. The rowing boat capsized and his body was never found despite Garstin being a strong swimmer and other two occupants of the boat surviving. His widow, Lillian (née Barkworth) was Mayor of Penzance in 1962–63. Items of his uniform and equipment from his service in the KEH in the collection of the National Army Museum. Photograph of Lieutenant Crosbie Garstin in 1914 from Old Comrades Association Bulletin 19: 23, 1952.

GLADWISH, Edward Lovell. 841. Serjeant. Born in Ore, Sussex, England 23/07/1879. Prior service in the South African Constabulary 1902-07 and as Private 1721, 1st Service Company, 1st Royal Sussex Regiment and awarded Queen's South Africa Medal with Cape Colony, Orange Free State and Transvaal Clasps. Enlisted in the KEH having sailed to London from Shanghai where he was serving with the Shanghai Municipal Police on board the SS Suwa Maru on 16/10/1914. Entered France 22/04/1915. Awarded Distinguished Conduct Medal (DCM) for defence of Vieille Chapelle 9-11/04/1918 (London Gazette 3/09/1918). Discharged 5/04/1919. Served with the Shanghai Municipal Police 1908-24. Photo from newspaper cutting when he was awarded the DCM.

GLASSPOOL, James A. 438. Private. Discharged 5/04/1919 (Shown in photograph Figure 23 as named Glasspool and a Private in the photograph). Possibly brother of George and son of Walter Glasspool.

GLOVER, Arthur Harding. 455. Private, Second Lieutenant Middlesex Regiment. Awarded the Military Cross on 12/04/1918 for gallantry between Steenwerk Station and De Seule during the Battle of Lys whilst commanding 'A' Company of the 20th (Shoreditch) Battalion of the Middlesex Regiment (London Gazette 16/09/1918). Second Lieutenant Glover was married in India in 1920 and commissioned Lieutenant in the Royal Army Pay Corps in 1940 (Military Cross, 1914/15 Star, British War Medal and Victory medal sold at auction 11/2019 by Dix Noonan Webb, UK).

GROSVENOR, Gilbert. Major the Honourable Gilbert Grosvenor, Rifle Brigade, King's Colonials, 2KEH and Nottinghamshire Yeomanry. Awarded Queen’s South Africa 1899-1902, 2 clasps, Transvaal, Cape Colony (Lieut: Hon. G. Grosvenor, Rifle Bde:); King’s South Africa 1901-02, 2 clasps (Lt. Hon. G. Grosvenor. Rifle Bde.); 1914-15 Star (Lieut. Hon. G. Grosvenor. K. Edw. H.); British War and Victory Medals (Major Hon. G. Grosvenor.) The Honourable Gilbert Grosvenor was born on 22 August 1881, the second son of the 1st Baron Stalbridge and his wife Eleanor, and the grandson of the 2nd Marquess of Westminster. He was educated at Eton, and was commissioned Second Lieutenant in the Rifle Brigade, serving with them in South Africa during the Boer War. He transferred to the King's Colonials in 1908. He then served with the 2KEH as a Second Lieutenant from Oct 1914 before transferring in 1916 to the Nottingham Yeomanry (Sherwood Rangers) with the rank of Major. Grosvenor married Miss Effie Cree, the daughter of the Reverend Edward Cree, on 4 July 1913. He died without issue on 15 June 1939. Medals sold by Dix Noonan Webb, UK at auction in December 2016 and photograph shown against Grosvenor on the 2KEH Nominal Roll. Lieutenant in 'C' Squadron KEH photographed at Woodbridge in 1914.