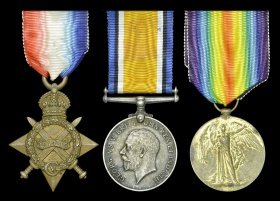 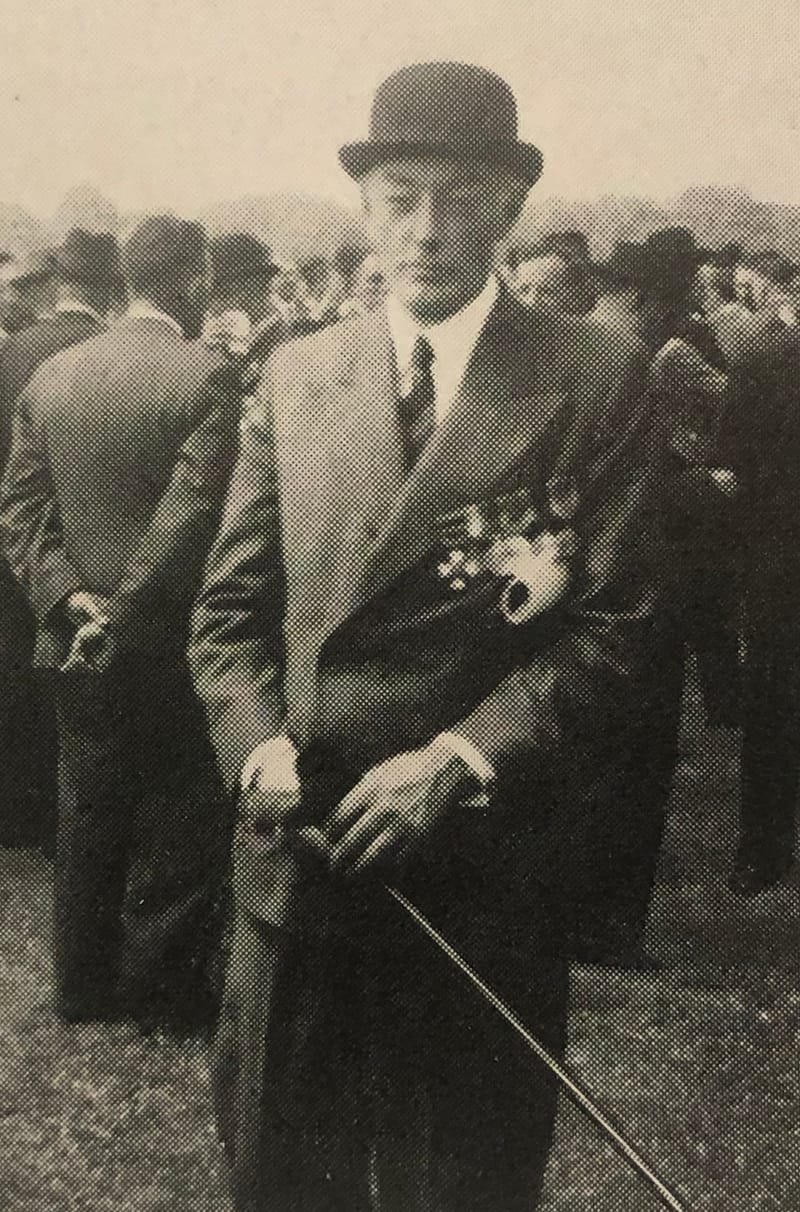 FORREST, H. A. 940, Private. 1914-15 Star (940 Pte. H. A. Forrest. K. Edw. H.); British War and Victory Medals (940 Pte. H. A. Forrest. K. Edw. H.). Harold Archibald Forrest was born in Streatham in 1889 and attested for General Service on 4 September 1914, giving his profession as Assistant Riding Master. He served during the Great War with King Edward's Horse on the Western Front from 5 May 1915, and, having subsequently transferred to the 2nd Battalion, Lancashire Fusiliers, was discharged on account of wounds on 9 August 1918 (entitled to Silver War Badge). He died in Rochford, Essex, in 1948. Medals sold by Dix Noonan Webb auctioneers, UK in 2017.

FOTHERGILL, William H. 961. Private. 'A' Squadron. Emigrated to Argentina before the Great War and returned to join up in 1914/15. Entered France 28/07/1915 and discharged 3/03/1919. Note on the Great War Forum indicates that his British War Medal and Victory Medal are held in a private collection. Brother of Reginald Hannay Fothergill.

FOTHERGILL, Reginald Hannay. Private. 'A' Squadron. Brother of William Hannay Fothergill noted on Great War Forum as having been hospitalised.

FRASER, John Neville (known as Neville). Private. Enlisted KEH 24/08/1914. Entered France 24/08/1915. Commissioned as a Second Lieutenant Royal Field Artillery attached to 'D' Battery, 105th Brigade, 23rd Division. Promoted to Lieutenant in Jan 1916. Wounded 25/08/1917. Promoted to Captain in 1918. Returned to Victoria, Australia on 24/12/1918. Born the son of the Honourable Simon Fraser, Senator for Victoria on 6/08/1890 in Toorak, Melbourne, Victoria. He was educated at Melbourne Grammar School, before going up to Trinity College, Melbourne. From there he studied in England at Magdalen College, Oxford and became a first class cricketer. He served in the Royal Australian Air Force in WW2 and he died in the Sydney suburb of Lindfield in January 1962. His son Malcolm would serve as the Prime Minister of Australia from 1975 to 1983.

FURSE, Ralph Dougnon. He was Private when attending training camp in 1908 as part of the Oxford university detachment. Commissioned as a Second Lieutenant KEH 1910, Lieutenant, Captain, as a Major commanded a Squadron of the KEH in WW1. Major Sir Ralph Furse, Colonial Service, late King Edward's Horse. ORDER OF ST. MICHAEL AND ST. GEORGE, K.C.M.G., neck badge and breast star in silver, gilt and enamels, the set contained in its Garrard case of issue, some minor chips to the enamel on the reverse of the badge, DISTINGUISHED SERVICE ORDER, G.V.R.,with second award bar suspension ring re-soldered; 1914-15 STAR (Capt., K. Edw. H.); BRITISH WAR AND VICTORY MEDALS, Mentioned in Despatches (twice) (Major); JUBILEE 1935; CORONATION 1937, the group mounted as worn and sold with a copy of his autobiography 'Aucuparius - Recollections of a Recruiting Officer' London, 1962. DSO., London Gazette 26th July, 1918: 'For conspicuous gallantry and devotion to duty during a hostile attack when he held for over five hours, 900 yards of a system with a hundred men and a weak company of infantry, ultimately withdrawing in good order, in spite of hand-to-hand fighting in the trenches. His skill and courage were most marked.' Bar to DSO., London Gazette, 8th March, 1919: (details 4th October, 1919). 'He handled the advance guard of Corps Mounted Troops in a most skilful and dashing manner during the advance from Lille to the Escaut on the 18th and 19th October, 1918. Under heavy machine-gun fire he turned the enemy's flanks and drove them out with the loss of one man killed and one wounded. He showed cool courage and able leadership throughout.' M.I.D., London Gazette, 20th December, 1918 and 5th July 1919. Major Sir Ralph Dolignon Furse, K.C.M.G., D.S.O., made a unique personal contribution to the history of the British Colonial Service. Born in September, 1887, the son of J. H. M. Furse, he was educated at Eton and Balliol College. In 1909 he was brought into touch with the Secretary of State for the Colonies, Lewis Harcourt, who was looking for an additional Assistant Private Secretary, to help his co-called 'patronage' work. Up to that time apart from the Eastern Cadetships, which were filled by competitive examination, recruitment for the Colonial Service had been sporadic and not on such a scale as to call for any special organization. The rapid development from 1900 onwards, of the hitherto un-administered inland territories of Tropical Africa changed all that. When Furse came to the Colonial Office in 1910 the administrative staffs alone of the Tropical African Dependencies had increased from a mere handful to a total of nearly 500. To deal with this situation was the task offered to Ralph Furse, he undertook it with alacrity. Though in form a personal Private Secretary to the Minister, and liable to discharge on a change in the incumbency, he was too good to lose, and he was kept on until 1914, by which time he had established a close relationship with University Appointments Boards and other sources of supply and had built up a system of selection based on the candidate's personal record and the impression made by him at interview. After his service in King Edward's Horse in the First World war, the Colonial office again turned to Furse, and in 1919 he was once more installed as Assistant Private Secretary (appointments). From 1919 onwards, Furse, though still holding no official position and still nominally a member of the personal entourage of the Secretary of State, was in practice the head of an efficient and growing Recruitment Department. The separation of the Dominions Office from the Colonial Office in 1925, and the appointment of a Colonial Governor, Sir Samuel Wilson, as Permanent Under-Secretary of State, enabled attention to be given to the need for reorganization of the office. Furse felt that satisfactory recruitment would be made possible only if the Colonial public services could be unified on a functional basis instead of being regarded as entirely separate territorial organizations. Largely as a result of Furse's representations that Leo Amery, as Secretary of State, decided in 1929 to set up a committee, under the chairmanship of Sir Warren Fisher to go into the question of recruitment. As a result of this committee's recommendation, the policy of unification was accepted by the succeeding Secretary of State, Lord Passfield; a Personnel Division was set up in the Colonial Office and Furse, along with his team of assistants, was admitted by special dispensation to the established Civil Service to form that half of the new division which was to be responsible for recruitment and training. Furse took a full share in the subsequent working out of the unification policy, and under his direction (he was now styled Director of Recruitment) the staffing of the Colonial Service went ahead until the outbreak of war in 1939. One of Furse's major concerns was the establishment of Colonial Administrative Service courses at Oxford and Cambridge, and also, subsequently, at London University. During the Second World War he initiated further study of the problem which was undertaken by a committee under the chairmanship of the late Duke of Devonshire when Parliamentary Under-Secretary of State. As a result the well known 'Devonshire' courses were established after the war. Furse retired officially in 1948 but continued until 1950 to act as part-time adviser to the Colonial Office on training questions. He published 'Aucuparius: Recollections of a Recruiting Officer' in 1962 and died in Exeter on the 1st October, 1973 aged 87. Only four DSO's were awarded to the KEH during the Great War and only Furse went on to win a bar to the decoration. Eleven uniform and equipment items of Major Furse's are held in the National Army Museum. Medals sold at auction by Dix Noonan Webb, UK in December 1992. Photograph of Major Furse taken at from Royal Review 5th July, 1953 (King Edward's Horse Senior and Junior Old Comrades Association Bulletin 20: 1953) and in 1915 see Figure 19.