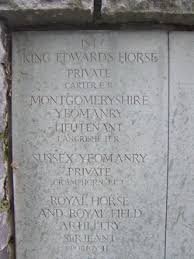 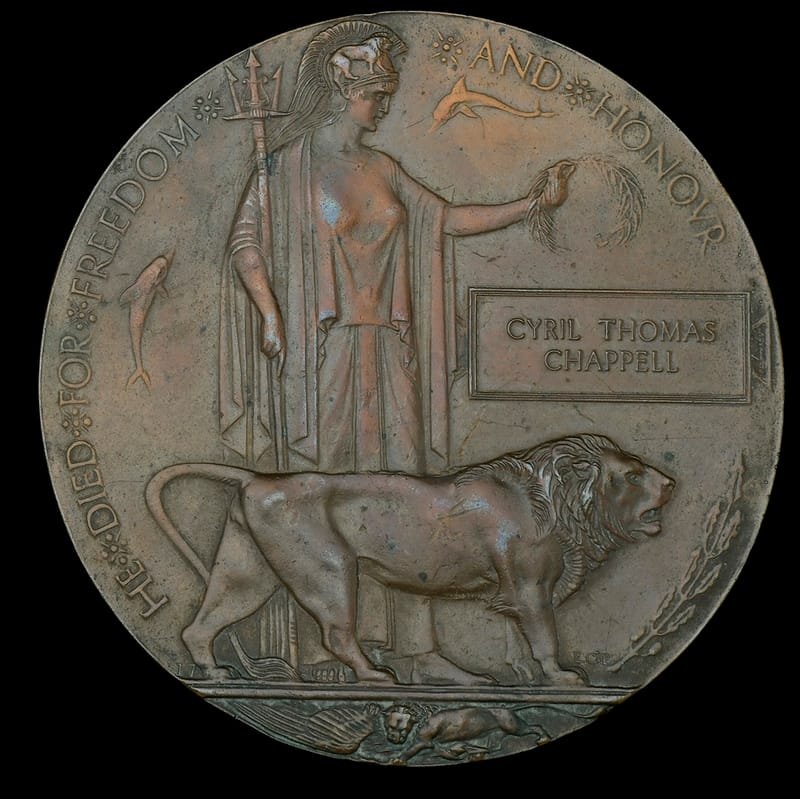 CAPPER, Isidore Alfred. 433. Private, Acting Corporal Northumberland Fusiliers 61202. Alfred Capper was born Alfred Friedlander and changed his name by deed poll Nov 1914 because of his surnames Germanic tone. He served in the 2nd King Edward's Horse as a Private later transferring to the King Edward's Horse as a Private 433 with him appearing in Figure 22 in a Hotchkiss machine gun section of King Edward's Horse in 1916.  He finally transferred to the Northumberland Fusiliers as an Acting Corporal 61202. He was rumoured to have worked in South Africa and this could have been sufficient connection for the appeal of the 2nd KEH as it was made up of Colonial volunteers. The family recall that although he didn't speak about his wartime experiences at one stage he was shot off his horse and buried by the earth thrown up by the shell but escaped unscathed, and that eventually they had to fight dismounted.  Alfred died in 1945 and was awarded the 1915 Star, British War Medal and Victory medal. The family retain his 2nd King Edward's Horse cap badge (With thanks for the portrait (shown in the 2nd King Edward's Horse Nominal Roll section) and other photograph and correspondence from his maternal grandson Robert Cruickshank).

CARTER, Bertrand S. 544. Corporal KEH, Second Lieutenant Machine Gun Corps, Lieutenant Tank Corps. Bertrand Stanley Carter was born on 28 January 1878 and educated at a Public School in England and was employed by an English company which had an interest in coffee plantations in Malaya well before World War 1. Soon after the commencement of hostilities he, like many of his colonial Malayan compatriots, travelled back to the ‘old country’ as he felt the country was in great danger and joined the KEH. He first entered the Theatre of War in France on 2 June 1915. He was subsequently commissioned as a 2nd Lieutenant in the Machine Gun Corps on 25 January 1917, and later as Captain, Tank Corps. He was appointed Temp. Lieutenant on 26 July 1918 and advanced to the rank of Acting Captain when he was appointed as Reconnaissance Officer finally relinquishing this rank when he ceased to be Reconnaissance Officer (28 March 1919). After the end of the War he acted as Demobilization Officer. His Military Cross was presented by H.M. King George V to Captain B.S. Carter, Tank Corps for Distinguished Service in France”, May 8th 1919); 1914/15 Star 544 Cpl. B.S. Carter, K. Edw. H.; BWM; AVM (Brit) Capt. B.S. Carter. He was recommended for the the immediate award of a Military Cross for gallantry at the Battle of Meteren on 16 April 1918. It would seem that confirmation of this was gazetted on 3 June 1918 in which the award is referred to as a Bar to a Military Cross. The award of a Military Cross was later published in the Supplement to London Gazette dated 16 September 1918 - it would seem probable that this further act of gallantry preceded his immediate award during the Battle of Meteren in April 1918. (For the action during the Battle of Cambrai 23 November 1917). Information courtesy of the British Medal Forum.

CARTER, Edwin Righton. 1409. Trumpeter, Died at Sea with the sinking of the SS Connemara after colliding with another vessel when sailing between Glenoore and Anglesey 03/11/16. Son of R. A. Carter of 13 Somali Road, Cricklewood, London. CARLINGFORD (HOLY TRINITY) CHURCH OF IRELAND CHURCHYARD, IRELAND.

CHARLES B. Staff Serjeant Major KEH since 1910 and retired in 1912 but returned to the Regiment and probably an original member of the King's Colonials since 1902.