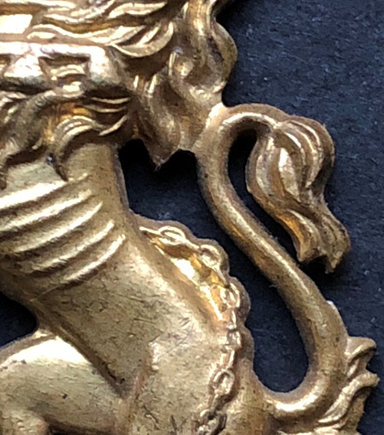 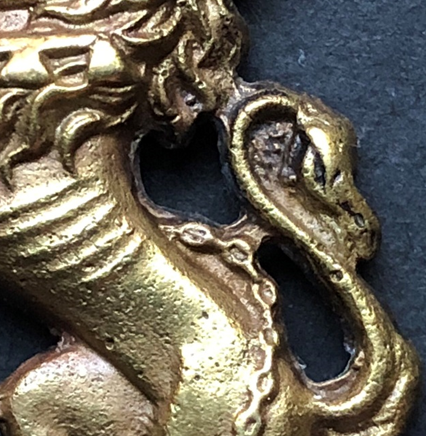 A characteristic feature of a genuine King’s Colonial first pattern Regimental Officer’s or Other Rank’s headdress badge is that they have a complete void between the unicorn’s back and tail.  This complete void can be seen in the comparison of a close-up images (Figures 175 and 176) of the genuine badge shown in Figures 169-171 and a copy in Figure 172-174.  The complete void is also clearly visible in the photograph of the badge in KK 1370 and in the collections shown in Figures 157-160.  A genuine badge is illustrated in Kipling and King and John Gaylor's Military Badge Collecting' (Pen and Sword Books, London, 1971) but a copy with the incomplete void is shown in Peter D. Athawes's 'Yeomanry Wars - The History of the Yeomanry, Volunteer and Volunteer Association Cavalry: A Civilian Tradition from 1794', (Scottish Cultural Press, Aberdeen, 1994).

Figures 175 and 176: Close-up of the non-voided and voided areas between the body and tail of the unicorn of a genuine (Figure 169) and a copy (Figure 172) first pattern Regimental King’s Colonials headdress badge (KK 1370).  The superior quality of the strike of the genuine badge as compared with the copy is apparent from the sharp definition of the lines across the lion’s chest and in the links of the chain.

The first pattern Regimental headdress badge at least in numerical terms would be expected to be the least abundant given the short date range it was worn together with the limited numbers of Regimental Officers who would have worn it.