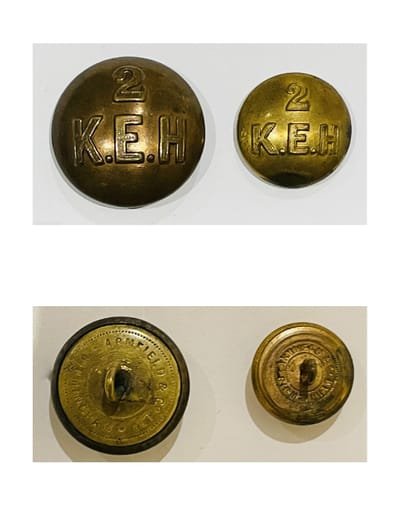 The 2nd King Edward's Horse buttons were in gilt for Officers and brass for Other Ranks (Figure 376) with a simple design of 2 over KEH (Ripley and Darmanin Ref No 142). They have sealed backs and fixed shanks. Ripley and Darmanin only note a brass button and do not differentiate between Officers and Other Ranks. The buttons are in two sizes, 25mm for the breast of the tunic and 17mm for the cuff.

The buttons of the 2nd King Edward's Horse have been noted with back marks for Armfield & Co, Birmingham and Firmin, London. There are also examples with a back mark pattern which is often referred to as the 'Hammer' or 'Hammer-key' see Figure 377. There is no definite answer as to which manufacturer used this pattern and why they didn't use their own name. One thought was that they were cheaper/lower quality than the buttons usually produced and the manufacturers didn't want their name associated with the cheap/low quality buttons. It was thought that it could be a Firmin produced button as they seemed to use the same button dies (information courtesy of Ian Baker).