‘A kangaroo on a rising-sun with a fern-leaf in the foreground and a scroll at the base inscribed Australasian.  In brass’ (KK 1376).

The ‘C’ Squadron (Australasian) Other Ranks’ headdress badge is shown being worn in Figure 226 which is a close-up image from the King’s Colonials group photograph. Several of these Squadron badges are also shown being worn in another group photograph of the King’s Colonials in Figure 116. In these photographs, the ‘C’ Squadron (Australasian) headdress badge appears to be in yellow-brass or gilding metal.

The Australasian Squadron headdress badge was worn from 1901 and appears in several photographs of the King’s Colonials at that date. There are notes in several publications as to this King’s Colonials badge being the first depiction of the rising sun motif on a badge associated with the Australian Military Forces. This is, however, not correct, as it has been established by Lieutenant Colonel Vernon that Lieutenant H.J. Cox Taylor was the first Staff Officer of the Australian Rifles in 1897 and he designed their badge and it used the rising sun as a backdrop to the crown to symbolise that ‘The Sun Rising Over the Crown of The Empire on Which It Never Sets’ (Sabretache: Journal of the Australian Military Historical Society, 7:21-23, October, 1959). Lieutenant Cox Taylor subsequently submitted the rising sun and crown as a design of the badge for the newly formed Australian Commonwealth Horse in January 1902 following Australia’s Federation in 1901. The design was accepted and it once re-drawn it became the badge of the Australian Imperial Forces.

A genuine ‘C’ Squadron (Australasian) Officer's headdress badge is shown in Figure 227-228. This badge has very clear fine details to the front and rear of the badge from a quality strike in rich gilt and non-footed loops with brazing solder of the same tone as the rear of the badge. 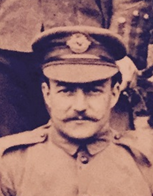 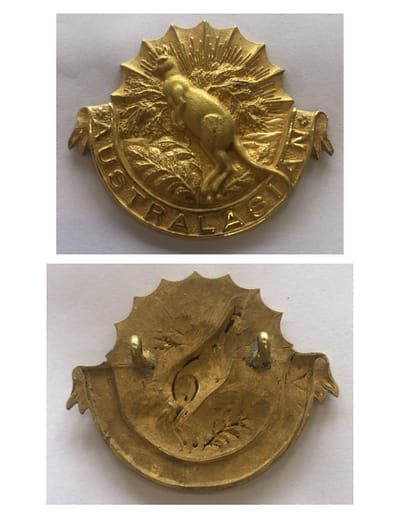