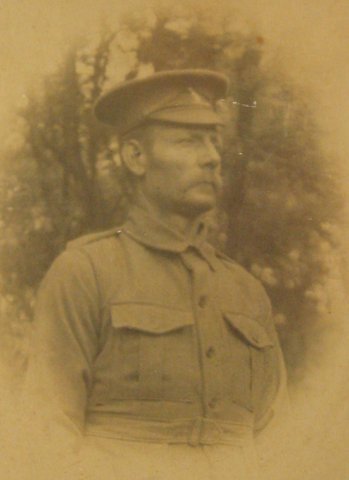 Image of an unknown Australian serving in the Australian Squadron, King's Colonials (dates to 1903-10 from headdress badge) photograph courtesy of the Upway Museum, Victoria (with thanks to Phil Garland).

KINDER, Thomas Harry. Trooper. A son of Mr Harry Kinder who lived in Arney Road in Remuera, Thomas had his secondary education at Wanganui Collegiate where he served as head prefect in his last year. He then went to study at Caius College in Cambridge. When war was declared, he signed up with King Edwards Horse and transferred to the 7th Battalion, Suffolk Regiment and went to France. He was killed in action at the Somme on the 3 July 1916. He is remembered on the Thiepval Memorial, Authuile, Somme, France and by a memorial plaque, St Mark’s Anglican Church, 95 Remuera Road, Remuera, Auckland, New Zealand. (Reference - Auckland Online Cenotaph).
KRO(U)GH, Henry Charles. 1377, Sergeant. Awarded the Military Medal. Nickname – Shorty. (Reference - Auckland Online Cenotaph).

WATSON, W. E. Sergeant. (Reference - Auckland Online Cenotaph).
WILLIAMS, Samuel R. 184, Trooper. Known as Sam. (Reference - Auckland Online Cenotaph).
WILLIAMS, Selwyn Coldham. Trooper. Transferred to Royal Field Artillery, 189th Brigade, C Battery and promoted to Lieutenant. "At School here from the beginning of 1906, left with a number of others in May 1912, to go to Cambridge. While there he joined King Edward's Horse, and being liable for service abroad, expected to be called upon immediately the war broke out. With others, however, he was given a commission in the R.F.A., and for a time did special work at Home before going to France. He saw active service near Armentieres, in September 1915, but was invalided home again in the following January. Returning in April to the Somme front, he was associated with the New Zealanders in the attack on Fleurs, where, on his senior officer being wounded, he took command of his battery, and was recommenced [sic] for a decoration, which was never granted. His unit was later moved to some other part of the front, where he was killed on January 18th, 1917." (In Memoriam, 1914-1918 [Wanganui Collegiate School]). He is buried in Klein-Vierstraat British Cemetery, Heuvelland, West-Vlaanderen, Belgium (I.A.17). (Reference - Auckland Online Cenotaph).
WILSON, Reginald. 456, Trooper.